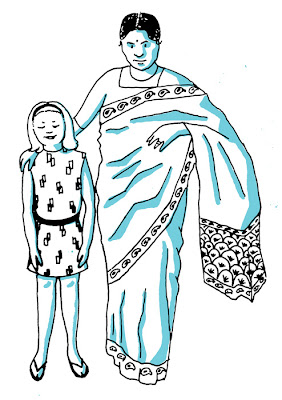 I decided not to grace Spencer’s absence from the party with any attention, so I went to sleep. Early next morning, registering his sleeping presence, I slid out of bed, grabbed Robin from Constance in the kitchen and, yelling,

left for the Yacht Club. He would have to make his own way, all alone.

Genevieve had turned down a lift, saying she wasn't up to it after the party. I'd wanted to talk to her about Boyd and Spencer. At the Clubhouse I sorted out the behind-the-bar rota, which had got messed up. The main thing was to keep Melvin away from it. Robin and her gang flew up and down between the Club House and the sea, covered with sand, shrieking with laughter, huddling with secret plots and exploding into complicated games. The girls' matching beach outfits each had different coloured spots. I fixed hair and drinks and towels and flip-flops. The Clubhouse was raised on stilts above the beach. It was air conditioned and there was a blast of warm air every time anyone came in or out.

An hour later Spencer turned up with Candida and Genevieve. Apparently Candida was due to crew for Spencer. There was some explanation about why the three of them were together and I talked blandly over it. Spencer had a lot of work to do, Genevieve's car had broken down, Candida wasn't fit to drive... Pretty little Bergan was with them for some reason. Robin dragged him off to join the beach gang.

Spencer asked Candida and Genevieve to check which boat he’d been given in the draw. As they skipped off to look at the list he leaned in, taking hold of my arm.

'Peggy, you didn't give me a chance this morning, I must explain darling.'

'Oh, heavens, don't worry' I interrupted, 'I expect it's just one of those things, when your work is as important...'

Tiny Candida clapped her tiny paws and jumped up and down. Her blonde mane flew round her tiny face.

I hate a woman who coos.

'They’re supposed to be the same.' I wasn't cooing.

'No, Candida’s right, she is the best. I always do well in Jessica.'

'That does sound naughty, Spence.'

I hate a woman who purrs. Did she say 'Spence'?

'You are silly, Candida.'

Genevieve was lapping it all up, and what's more, she was cooing and purring too.

Spencer, between the two twenty year olds, looked foolish, puzzled, pleased. When had Genevieve got friendly with Candida? And what about all that supposed tragedy with Candida's father’s funeral?

Melvin and Gloria-Jane pitched up late, as usual, still irritatingly close. Melvin seemed not to be adding his usual Flash to the Seven-Up served by Gretchen on bar shift.

The crews had to leave to get the boats ready for the race. I let Spencer give me a kiss, but turned away so it landed on my ear. I used to crew for Spencer myself. The race committee were on the starting platform.

To avoid watching the race I fussed around the children till they ran away down to the sea. Genevieve found me tidying the storage area out the back behind the bar. She already knew me well enough to realise I was unhappy. I was touched, and told her about Spencer being called away to work during the party.

'Honestly, when you know you won't mind. Candida's father died last month, which was bad enough. Then she found out he'd been married to someone else, not Candida's mother, so she is, well, not legitimate, and the first wife, the actual wife, gets all the money, and her mother is going to be homeless, and Candida has no money. She heard all this before the party and tried to go Home to London and couldn't and got totally hysterical. No-one where she lives could help and she asked for Spencer, and he took her to the office to send some telexes from there. He's so kind.'

I waited a moment, to be sure my voice wouldn't shake.

I stepped out the back, walking away from Genevieve and into the car park.

The sandy square had filled up with little rounded British cars, big rectangular pointed American ones and even the occasional Japanese model. Two or three had a stripped section at the front where they had been caught driving in a sandstorm. The sandblasted windscreens would have been replaced already. A couple of unlikely vehicles dusted up – the trucks of the well fire company.

Round the Clubhouse and out to the beach bounded four brown and muscled young men, Dynamite's well fire team. My excited friends told me they had put out a small fire in the field that morning. The firefighters began playing beach cricket with the children on the coarse matting laid in paths to protect feet from the heat of the sand. The boys concentrated fiercely while the girls whirled around them. All the children were eager for the attention of these big bronzed exotic males, so unlike their fathers. Dynamite wasn't there – none of them had the inverted triangle shape we’d been privileged to witness at the Artemesia Club. I settled down with a group of friends in the comfy chairs turned to face the beach. Robin was concentrating less on the young men than on Bergan. Small though he was, he could keep up with the game. Gloria-Jane had torn herself away from Melvin in celebration of this very special spectator event, and Melvin had produced his home-distilled Flash and added it to his Seven-Up.

The men were fascinating, throwing every muscle and sinew into the competition; the children were involved as never before in a beach game with adults. How Richard would have loved it.

Suddenly over the children’s shrieks and the men’s encouragement a much louder voice bellowed,

Surprisingly the men reacted to the shout by sprinting for the sea, throwing themselves headfirst into the shallows, executing a few wild strokes and then turning, standing, wading out.

Dynamite was fully clothed, unlike the others, who were dressed only in swimming trunks, and although he could give the young men at least ten years, all eyes were on him. He was lit up with rage. He was filthy, and dressed in oily red overalls. He looked... good.

Cowboy was the bravest of the crew.

‘Jeez Dynamite - the fire's out. Went out like a dream.’

The others stood and nodded, hands on hips.

‘Was out. Ain’t now. Get back in your vehicles and get back to the field. It’s cratered good.'

Awkwardly the men gathered the clothes they'd dropped in their exuberant arrival.

The women were still sitting, riveted and regretting the imminent end of the entertainment. No-one had glanced at the race for half an hour. Genevieve stood.

‘Bill! Listen to yourself! All they wanted was a little rest and relaxation. They didn't know there was a problem. And look at you. You look disgusting.’

‘That’s ugly talk, lady. We worked six hours this morning, first so hot you're like to melt, then shivering with cold, the water from the lake we made pumping over us. Can't hardly move, so weighed down by soaking clothes. I need a rest just as much as these guys, but there's a job on.’

No woman ever likes hearing the word ‘ugly’ directed at her, and Genevieve was suddenly lost for words. I took advantage of this temporary state of affairs and removed her from the scene, escorting her out to the Ladies.

As we left Gloria-Jane rolled her shoulders back and sauntered towards Dynamite, who was staring slack-jawed at Genevieve’s retreating back. I shoved her in the toilet, staying outside to watch.

‘It’s not fair to blame them Dynamite, they just needed to cool off. They knew they would be welcome here.’

‘They did a damn good job this morning, and I can’t believe some damn fool let the fire start up again. The field operations here need nailing down a good sight tighter, and I don’t mind who knows I think it.’

‘Is there anything you can do in the next hour?’

‘Guess not. I've left the site team working on the water supply. Nothing to be done till the heat goes tonight. Maybe nothing even then.’

‘Then stay, sit, swim, relax for a while. You’ll all work better with cooler heads.’

Some of the air came out of his tense posture and he nodded. He made a gesture toward the men, waving them back, and they careered into the sea, followed by the children. A hail of shoes hit the shore as they were taken off and chucked onto the hot sand.

Dynamite followed Gloria-Jane meekly. He turned down Melvin’s kind offer of a slug of Flash to go in the Canada Dry Gretchen poured for him, explaining that a clear head was kind of important for dealing with a fire. Melvin had been dealing with every aspect of his life for many years without the benefit of a clear head, so found this rather hard to understand, but let it go patiently.

Dynamite then wandered towards me, standing guard outside the Ladies. My spirits rose automatically till I realised he was looking for Genevieve. He walked right up to the door so that when she opened it and came out they were standing chest to face.

Genevieve raised her eyes to his while keeping her chin lowered. I wondered if that looking through the eyelashes thing would work for me.