Kuwait was invaded by Iraq on 2nd August 1990, and liberated 7 months later by forces from the USA and an international alliance in an operation codenamed ‘Desert Storm’. The British part of the operation was less excitingly named ‘Granby’. There have been no ‘Granby’ video games. 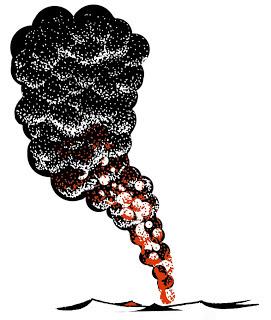 The smoke had blotted out the sun. It was raining oil. Raining oil! How could we fly through that?

Staring out of the fragile-feeling Boeing 727 into the blue as we lifted off from Bahrain for Kuwait I rubbed the gold dhow round my neck between my right thumb and index finger as my mother used to do. She'd sent it in the little blue box she’d always kept it in. It was the first time I'd seen it since we'd left Kuwait, I didn't know she still had it.

There was a tiny typed note inside the box,

Darling,
I thought you might like to have this for your return to Kuwait, or leave it for Ingrid if you would prefer. I expect you remember that her mother gave it to me for our first Christmas there.
Look after yourself, and let me know you are alright.
Mummy

I couldn’t remember the last time she had mentioned Ingrid, much less referred to Gloria-Jane. Ingrid and I hardly ever talked about Ingrid's mother either. All too painful. I kept the dhow, I didn't even show it to Ingrid.

The sky was darkening towards Kuwait, or was I imagining what I expected to see? I was looking for the 700 oil wells that the Iraquis had set alight as they retreated before the onslaught of the Americans and their allies.

The pilot was keeping us as far as possible out of the smoke, which was being pushed around by the desert winds, those otherworldly winds of the Middle East. Nose pressed to the window, I saw the fires for the first time. My heart leapt. Weirdly, I longed to get closer. My chest constricted with excitement, and with guilt at the excitement.

For much of the time during the invasion the internal phone lines in Kuwait city stayed open, but there had been no international calls, and only precariously smuggled post. Genevieve had queued and called me from the telecommunications centre when international calls became possible.

It was too strange to talk, imagining her in a crowd of strangers, all waiting to say the same thing: 'I'm alive'. I imagined that the crowd would be surprised to hear her joyous exclamation in English. Most resident foreigners had left long ago. The foreigners in the clean-up crews had access to their own communications so would not need to wait in line for a phone.

I hadn't yet accepted the job, but that moment, hearing that voice, decided it. My father had been recruited by Intech in London long before the liberation operation was launched, and brought in through Saudi at the first possible moment, the first week of March. He phoned me on the company line, and said he was sorry he couldn't meet me at the airport.

My father reminded me that I was arriving in the middle of Ramadan, which had started on the 17th March, so not to eat or drink in public during the hours of daylight. Ingrid joked that perhaps when the smoke blotted the sun out everyone could have a sneaky snack. I'd planned to eat on the plane, but only managed one gin and tonic and one small saucer of nuts. Never mind, the days are always short in Kuwait.

I was nervous about landing – Ingrid’s journalist friends had been regaling her with stories of near disasters on bomb-cratered runways. The plane was almost full, the atmosphere earnest. Heads down, we read and annotated our briefing documents. To distract myself as we came down towards the wreckage-strewn airport I spoke for the first time to the man in the aisle seat.

‘Are you part of the British clean-up team?’

‘I'm putting my company forward for the clean-up in the Gulf. It's imperative we install more barrages to protect the mangroves and…’

We were the do-gooders. The saviours. Kuwait was bringing us in to undo what the Iraqis had done to their country. What the rescuers of Desert Storm had done too, but we didn't talk about that.

The clean-up guy remembered his manners, and asked me what I was doing there.

‘I'm a sort of clean-up person too' I said, 'I've come to clean up the Sheraton.’

Ingrid's journalist friends had described the Sheraton vividly. Hotels in hotspots tend to specialise, deliberately or not. During the occupation, the Sheraton had been occupied by Iraqi officers, including the Republican Guard, while the secret police had gone to the Meridien and the Iraqi businessmen to the Plaza. Now the Sheraton was home, if it could be called that, to the less connected journalists. No room service, no water even. At the end of the occupation its manager was given an hour to clear the building before it was looted – everything from the piano down went. Then they poured petrol over the ground floor, mined it, and blasted it with tank fire. We were aiming to get it up and taking proper non-journalist business by September. Six months. The Iraqis had had seven months to wreck it - could we get it back in business in less time?

We landed. Kuwait International Airport. The winds were blowing the smoke away from us and the sky was blue, the heat and the runway smell familiar. My chest gripped again in a fever of confused joy. The physical feeling was that of home-coming as a child when we had flown back from England, but now I felt bad about my happiness, and ready to deny it.

In the airport the tones and patterns of the voices were welcome; there are different accents you hear in each Arab country and I thought I could detect the ones I'd known as a child.

Once I was through the barriers, I scanned the faces. I stared at each woman – would Genevieve be wearing a headscarf and black silk abaya? Would I recognise her even if she weren't? I had seen her every year when she and her Kuwaiti husband Saleem came home for a couple of weeks in August, every year for 20 years since they had come to England for the British half of their wedding. 10 years old, I had been so proud to be her bridesmaid. But she must have changed so much since August 1989. Maybe she had dyed her red hair black to make herself less conspicuous during the Occupation.

But instead of Genevieve, here was oil industry legend Spencer Stewart pushing through the crowd. He hugged me, let go, grasped my shoulders, and laughed,

‘Why have you come for God’s sake?’

Then we chanted together,

And we were both laughing.

‘Ah well, come to the car, we’ll talk there. It’s no red and silver 1967 Chevy I’m afraid. We take what we’re given for the time being and we’re very grateful if it goes. But darling, why have you come?’

I didn't want to answer.

‘It’s like home. It's like I'm doing what I should be doing. What I'm meant to do. I'm glowing. I'm buzzing.' He laughed again, 'Maybe that’s just the chemicals. The hotel is hell, there's virtually no water, the rain leaves you black and the smoke blots out the sun, and everything is destroyed. And I feel happy. All day every day solving crazy problems, making crazy demands on the people I'm working with, looking at the problem in front of me, one foot in front of the other till one job is done then there are 2,000 more, and I fall asleep like the dead, and wake happy to face another day.’

‘Really? Well, maybe it's my turn now. Come on Robin. Why did you come? I can’t believe tarting up the Sheraton is what it's all about.’

I still didn't feel the need to answer, so I asked him the next thing on my mind.

'Have you seen Dynamite? Now there's a man who's spent his whole life doing what he was meant to do - putting out fires and starting fevers. I remember him so well, and the oil fire summer. I think it's fair to say all the women were infatuated with him. He must be here surely?'

'Yes, he's here. He's busy. Our paths haven't crossed. Your mother at least was never keen on him - always said he was highly unreliable.'

A few lines of 'Anthony and Cleopatra' came into my head:

'I am fire and air, my other elements I give to baser life'.

The smoke clouds had closed in, it was night in daytime. We drove into Kuwait city. The central streets were as I'd seen them on television - trashed by 20th century city warfare. But the domes and minarets were lit, in celebration of Ramadan. And then the call to prayer echoed through the streets, beautiful, spine-tingling.