Gloria-Jane and Melvin were in one of their more annoying moods that evening, flirting and fighting at the same time.

‘Melvin, I can’t believe you are wearing black framed glasses and stupid side burns to a medieval party, you look ridiculous.’

‘Gloria-Jane, glorious girl, we all look ridiculous. At least the men do. Look at Nelson’s hat!’

‘No-one else looks as stupid as you. I don’t know why you didn’t get rid of those side burns before the party, anyone else would have done.’

‘You know the facial hair goes with the first summer holiday shamal. You wouldn’t want me to be inconsistent. You love me for my consistency.’

Perhaps this conversation doesn't sound overly flirty. But Gloria-Jane was launching her verbal attack on Melvin while sitting on top of him and only half-heartedly wrestling the satin skirt of her medieval costume back down towards her knees.

They carried on like this all evening, roving the house and garden in search of mead and food and company while every now and then making fresh attacks on each other. Whenever I saw them I pulled her off. Goodness knows what the Simpsons and the Greens and the Aldertons made of it. They left quite early. I couldn't believe that Spencer had left me to it. What a louse. The hubbub around me increased my sense of isolation, and my isolation increased my indignation.

I looked for Robin, to tell her she must get off to bed and found she had retreated to the kitchen again, this time with Dynamite’s son Bergan. They were inspecting the budgerigars, trying to work out which was Benedict and which Bertha. I’d said they might both be Benedict, but this was an outcome which she refused to contemplate. We'd been told that the colours of the things above their beaks give an indication of budgerigar gender, but they seem to alter all the time, and the birds showed no interest of any kind in each other. Sex is so complicated.

Boyd remained the only man looking half-decent, quite an achievement while dressed as a medieval peasant. I'd learned from his inspection of Genevieve after she fell that he was obviously short-sighted but he still wasn't wearing his glasses. This was causing him to lean towards Gretchen in a myopic attempt to lip read as she explained her vision of medieval England. You know how some people when they’re not wearing their glasses can’t hear what someone’s saying to them on the phone? He was like that. She was clearly finding his body language very encouraging.

Genevieve had made an early getaway from the party when I wasn't looking. I think she was embarrassed by her fall. I sent Gretchen away to check the mead supply and took the opportunity to tell a tipsy Boyd that I’d heard from ‘a little bird’ that a ‘certain someone’ is not only a real gentleman, but terribly funny. So far  I hadn't noticed Boyd being even remotely amusing, but this never fails with men. The next day l would tell Genevieve that Boyd said she was a wonderful listener. Definitely true; or at least, since she hardly seemed to say a word while they were talking, I presumed she was listening.

Out in the garden Dynamite was drifting back and forth thoughtfully on the swing. The swing was top quality, imported American, but I feared for its life – they are not meant for enormous men.

‘Just tone it down’ I hissed at Gloria-Jane who was standing with Melvin pressed against her back as she leaned forward, hands on the veranda wall. Her dress was in place but she was pressing his hands to her chest and said,

‘Cleo, I was just saying to Melvin, isn't it marvellous how, no matter how hot the rest of you is, your breasts always stay cool? I love that. It’s so useful, sort of in-built temperature regulation. We must talk about it some time. I think the left one is cooler than the right but Melvin thinks it’s the other way round.’

I marched back inside, feeling more and more maudlin, and the next time Boyd caught my eye I give him a tiny brave smile.

ROBIN
Bergan told me that he and his father are going back to America. He calls his father 'Dynamite', so strange. Dynamite may have to come back to Kuwait again, but Bergan probably won’t come. He just came this time because his grandparents who he lives with most of the time had to go away to a hospital because his granny was sick. We spent most of the party in my room talking. Mummy was too busy with the party to realise he was there and that I hadn't gone to bed. Most of the time we talked about our families. His father is always working, and his mother's not there, he’s not quite sure why, his father doesn't want to talk about it. His father leaves him with his grandparents most of the time, because he is away putting out fires, and they are really nice, but really old.

Ben and  Glenn are my boyfriends. Ben is funny, so that makes me like him, and he says clever things as well as funny ones. Glenn never really says anything, to be honest. Bergan has even better hair than Glenn. His eyes aren't so big, but they are dark dark brown, even almost black. I have never seen anyone as beautiful as he is. He is as pretty as one of my international dolls collection. His head looks like it’s wider than normal. My brother Richard always says Glenn and Ben both have big heads. I think Bergan loves me too.

Finally it was over. Leaving last, as they picked their way through the wreckage to the door I asked Gloria-Jane why Melvin looked so odd.

‘He’s shaved off the side burns, look!’ 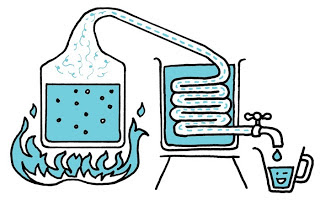 And indeed, he had crept into our bathroom (guests were not supposed to be using the family bathroom, partly because the still was in our shower and we all maintained a bit of a front about the home-distilling) and used my nail scissors then Spencer’s razor to get rid of them. Some superficial injuries had resulted due to his intoxication levels, but the scars would heal, and Gloria-Jane was leaving her gratitude in no doubt. I envied them.

‘For heaven’s sake Gloria-Jane, get off him, you’ll never get through the door like that.’

The waiters had left once the food had run out, so no-one had been clearing up for a while. The fairy lights drooped off the pictures and lamps. The ashtrays were full and there were cigarette ends everywhere. I closed the doors to the veranda, glancing down to the garden, dotted with chicken bones, toothpicks, glasses. There was no-one to talk the party over with. How could I be sure it had been a success?