The memories of Cleopatra Stewart, Company Wife to Spencer Stewart, mother of Robin and Richard and the impressions of her 7 year old daughter Robin.

I needed a new friend. I chose Robin’s new teacher.

I sent Robin in with a note inviting Miss Cardinal to pop round after school. She was surprised to see Gloria-Jane.

‘Tea, or Pink Lady? Gloria-Jane and I are having Pink Lady. Come out to the veranda, it’s nice and shady.’

Our Pink Lady sounded and looked innocuous but it was based on the alcohol we called Flash and distilled in our showers. I'd added 7up (the lemonade we got from the Company souk), condensed milk and some red colouring. The stills were mostly produced in one of the contractor's workshops. I was having my Pink Lady without Flash - I like a clear head.

The sprinkler was throwing water out in scintillating inviting parabolas. The girls, having had squash and treats, had changed into swimming costumes and were running through it shrieking. Miss Cardinal assumed a professional demeanour and began,

‘Robin and Ingrid are wonderful girls, and certainly at the very highest achievement level of the class. I gather you have been concerned, Mrs Stewart, about the times table situation, but I really wouldn't worry. A girl of Robin’s intelligence - ’

‘No, Genevieve – it is alright if we call you Genevieve?’

'No, don’t worry about that. We just thought we’d like to get to know you.’

I had caught a glimpse of the three of us in the big mirror over the mantelpiece as we crossed the sitting room. My English Rose thing, blonde hair teased in rolling waves around my head, Gloria-Jane with her glossy complicated brunette up-do, and Genevieve with her deep red hair, brushed forward over her shoulders, resting comfortably on her breasts and stopping at nipple-height. It had clearly been ironed to within an inch of its life, and fell to frame her face from a centre parting. I was wearing pinky-orange lipstick and pale blue eye shadow. Gloria-Jane was inch-deep in foundation and all the rest. I never wear foundation, it’s so uncomfortable, especially in the heat, and I’m very lucky with my skin. Genevieve wore no make-up at all. We looked good together.

To relax Genevieve, we poured out information about our mothers and husbands and love lives. We kept her tumbler full. A girl needed liquid in that heat. Ingrid and Robin had carried the sprinkler over to the edge of the garden by the big swing. Genevieve was rattling off gossip and even doing little impressions of the children and their parents. She was grateful for our attention.

‘How old are you Genevieve, if you don’t mind.’

‘Well, I always mean to say that I'm 24 because I think that sounds better, but in fact I'm going to be 23 next month.’

Surprisingly, just as she finished this sentence, she leapt from her blue and white woven plastic chair and flew down the veranda steps onto the lawn. Robin had come off the swing at the height of its forward motion. Genevieve had seen her let go of the chains and not realised it was part of the game – to fly through the spray. The girls were always falling and jumping off things, usually deliberately, and usually with a dead-pan reaction – this too was part of the game. Genevieve ended up in the spray trying to rescue a surprised Robin. Ingrid and Robin were puzzled but pleased to see their damp teacher, and in no time were teaching her the joys of that moment at the top of a really good swing when the chains go limp for a second. A moment out of time.

I went into the house and got a towel ready for her return. She was rather sheepish and had sobered up somewhat.

‘Would you like to come to the Artemesia Club with us and have a swim Genevieve, since you’re wet already? I'll lend you a costume and some clothes. I bet you’re not such a different size to me.’
We soon got Genevieve kitted out in my black bikini. It was slightly too small for her hourglass figure so her perfect creamy curves were bursting out of it. We put one of my towelling cover-ups on top, Gloria-Jane borrowed a red bikini, I took my pale green one and we bundled the girls into the car.

Gloria-Jane and I had always drawn attention, but add Genevieve to the mix and no-one could take their eyes off us as we swanned around the pool in the bikinis. We settled on one of the terraces; chairs, tables and a tree for shade.

ROBIN
One of my favourite things is sitting with our legs swinging off the second diving board with Ingrid. When we are there no-one can hear what we are saying. It’s wide and doesn't bounce and when someone else does come up we just roll forward and fall off the edge. Sometimes we get up and do a standing rolling falling dive. The only thing we don’t like is the stuff on it is rough, like a doormat, that’s to stop it being slippery. So if we’re going to be a long time we bring a towel to sit on, and then when we have to go home one of us falls into the pool and gets out and the one on the board tries to drop the towel on top of her like a capture net.

Genevieve loved the “hole in the wall” – a food kiosk next to the pool selling drinks and snacks including small plates of chips. A plate cost 50 fils and came with a generous portion of tomato ketchup. The children found it almost magical. Most adults were less interested, but we were beginning to be aware there was something child-like about Genevieve. She couldn't swim, she had told us, and having used our Company number to get chips and wolfed them down, was sitting on the side in the the water sprays which helped to keep the pool cool, laughing at the girls fooling around on the second board. I dropped off my chair to lie on my towel.

I pushed myself up onto my elbows. One of those crazily triangle shaped men was bounding up the steps to the top board. He stood, poised against the sun, balancing just on his toes, lifted his ridiculous arms, smiled so that his teeth flashed once and then, bending his knees ready to spring, toppled off sideways, turned, flailing, in the air and hit the water flat in a belly flop so noisy that even the largest of the teenagers would have lost to him in a dive bomb competition. Gloria-Jane and I gasped, partly worried for his health, partly worried for his dignity, partly impressed by his bravado and very impressed by his body, which was now drifting lifeless on the disturbed surface of the water.

We were rooted to the spot, but Genevieve’s caring side sprang into action once again, and she leapt into the pool to help. She had forgotten she couldn't swim and within a few yards began to flounder. Triangle man, coming round after the initial shock of impact, zipped into action at the sight of the gorgeous drowning woman. Forgetting the smart of embarrassment and the smack of the water he flipped Genevieve onto her back and towed her smoothly to the side, his hand under her chin, her body thrashing on his as he steered himself swiftly backwards. His head connected with a crunch to the concrete wall of the pool. Again the tables were turned and it was he who needed help from her.

Dazed and confused they finally heaved and dragged each other out onto the side and collapsed. Exhausted and flat out, their body language was that of basking sealions, their appearance of Sports Illustrated Swimsuit Edition front cover models. I propped myself up higher to witness the next stage of the encounter. They were laughing and looking intently at each other, deeply relaxed. Then they quietened and got to their feet, turning away. Genevieve came back to the grass terrace, and the man watched her walk up, then went down the pool to the shallow end, where he hopped in, swinging his weight round one hand placed on the poolside. Beautiful. I had a feeling he needed the water to cover his confusion.

Genevieve had reached us.
‘He’s Bill Kirkwood, he’s in charge of the putting out fires people. I've met him of course, but you know, I didn't really realise exactly. He told me he was Dynamite.’

‘Not very modest’ said Gloria-Jane, ‘but I can quite believe it. These firefighting cowboys are often quite something, and I believe they get a lot of practice.’

‘Not very modest, to tell you he’s dynamite.’ 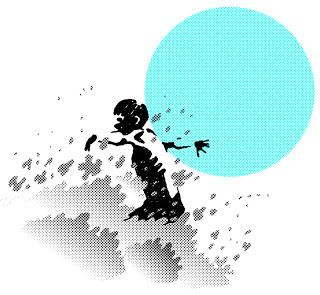 ‘Ah no, the fire guys call him Dynamite, because he’s in charge of it...’

‘Ah’, replied Gloria-Jane, ‘they put the fires out with dynamite. But that one seems more likely to light a fire. Absolute dynamite. Goodness, what couldn't I do with that? Seems like a nice boy though. Look at him playing with that little mite.’

Bill ‘Dynamite’ Kirkwood was flinging a little boy high, whooshing him through the water and up. Richard used to throw Robin into the air like that when they were playing in the pool. She’d loved it but I wasn't completely convinced that the little boy’s squeals were all of joy.